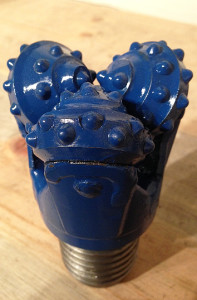 Well drilling technology is a constantly advancing and emergent field. Increasingly new territories are become viable as scientific advancements in several fields allow drilling deeper, at extreme angles, and under immense amounts of pressure in almost any environment on land or water. Some of the most interesting developments have come in the area of Materials Science; the rice of Tungsten Carbide Inserts (TCI) and Polycrystalline Diamond Compact (PDC) have resulted in significant improvements to modern drill bits, but tri cone and fixed cutter. This article aims to cover both materials in some depth and explain why they’re so commonly used for tri cone and fixed cutter bits.

Tungsten Carbide is the most commonly used material in the Cemented Carbide family, which is a type of “metal matrix composites”. While that sounds fancy, it’s essentially a mixture of tough carbide particles suspended in another material, in this case tungsten. The tungsten has a comparatively low melting point, allowing it to turn liquid while tiny carbide particles stay solid and float around in the liquid metal. When it becomes a solid again there is a matrix of carbide particles which form a composite of the two materials. Coating the button bits of the tri cone in this material dramatically increases the lifespan of the bit. The Tri cones themselves are not made out of Tungsten Carbide, as large volumes of the material are actually rather brittle. Where it gains the most strength is coating a very sturdy and resilient metal, providing the surface with exceptional hardness and resilience, as well as keeping any cutting surfaces on the tri cone sharper longer. In addition to durability, tungsten carbide offers greatly improved resistance to heat which allows tri cone bits with TCI to drill faster without suffering heat damage from the friction. For all these reasons tungsten carbide button tri cone bits are the most used in the world.

Polycrystalline Diamond Compact: perfect for mining tools, not so much for engagements

Among the hardest of all commonly used tool materials, Polycrystalline Diamond Compact (PDC) is not suitable for tri cone bits, but has come to be one of the most popular materials for drilling in sandstone, hale, and limestone. PDC builds on the earlier discovery of Tungsten carbide, and often functions as almost an additional layer of particles within an existing matrix. First, industrial grade diamonds are sorted by grain size, with “nanocrystalline” diamonds measured in nanometers, and “microcrystalline” diamonds measured in micrometers. These particles are then bonded to a metal matrix to create a super hard material about 0.5mm thick. This can coat the drilling surface of a fixed cutter bit. These bits can then be operated at very high speeds in highly consolidated rock formations.

Materials of the future: what will we be making tri cone bits with a decade from now?

We may not be fortune tellers, but perhaps the most interesting material currently on the market is Diamond-Like Carbon (DLC). A somewhat experimental material that currently exists in 7 distinct forms, it recreates all the material properties present in diamond by using hybridized carbon atoms. This essentially allows materials to be bonded on an atomic level. The most astounding form of this material is known as “tetrahedral amorphous carbon” and research suggests it could make a stainless steel tool so resistant to wear that the lifespan would increase 4000%. If this material can be properly adapted for mining drill bits a tri cone that traditionally lasted a week would last eighty-five years!