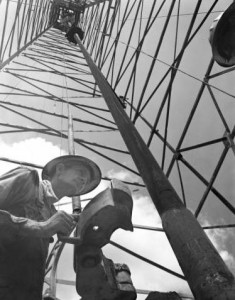 Canada’s history has more ties to the oil industry than many Canadians realize. Oil was first discovered in Canada far before modern drilling practices like tri cone bits or gauge protection, even before confederation or the constitution act of 1791 that created “Upper and Lower Canada.” A Cree Indian named “Wa-Pa-Sun” brought the first sample to a representative of the Hundson’s Bay Company in 1719. Further reports of oil from the Athabasca region came in from explorers in the 1770s–the Chipewyan Indians had been using this surface oil to caulk canoes for an untold number of years. The remoteness of this area prevented much commercial interest for more than a century. The Oil Fields of Alberta would not be drilled for almost another 100 years, where Canadian drilling embraced technologies such as using fixed rods for the well “string” and eventually tri cone drill bits to exploit this remote resource.

Long before tri cone bits and other technological innovations opened up Alberta’s oil reserves, the first oil well in North America was established near Sarnia, Ontario, in 1856. The discovery of this well was certainly amateur—not only did they lack modern tools like tri cone drill bits, they lacked drills all together! The well was dug (not drilled) by hand down the hill from a Kerosene plant. At the depth of a mere 15 and a half meters oil was struck and Canada’s first commercial oil reserve was under development by an American: James Miller Williams. The wild and unregulated nature of oil discovery and exploitation in North America during these early days leaves us with some confusion surrounding if this was the first or second well in North America. Either way, oil drilling in those pre-tri cone days was a comparatively simple matter, and Williams quickly expanded his business until he incorporated as the Canadian Oil Company—the world’s first integrated oil company – handling oil production, refining, and sale of refined products.

Innovations in oil extraction such as tri cone drill bits, improved pole-tool drilling, and better rail access to take the oil to market lead to an explosion in Alberta’s oil exploration. Turner Valley had oil and natural gas discovered in 1914 and oil fever swept Calgary. Reports indicate that in one day over 500 “oil companies” were registered on the newly incorporated Calgary Stock Exchange. The new tri cone drill bits (discovered in 1909) were hard at work; however many thought the rush of 1914 was unfounded as more wells in Turner Valley continued to run dry. That all changed when the Royalite Oil company discovered a massive reserve in 1924. They encountered a massive blow out as countless cubic meters of oil came out of the well over 21 days, destroying the drilling rig right down to the tri cone bit along with almost a kilometer of drill casing, and igniting a fire that blazed for weeks. However, thanks to the drilling prowess of the newly discovered tri cone bit, several more years of oil exploration paid off for Royalite when they discovered the largest oil reserves in the British Commonwealth in 1936. This created a wave of oil exploration across Alberta, made possible by the tri cone bits. It took 133 dry wells before the tri cone bits struck black gold again 50 kilometers south of Edmonton. The tri cone bits drilled through the bitterly cold winter of ’46 and ’47 before striking oil and uncovering Alberta’s largest oil field. The field is under development that continues to this very day.